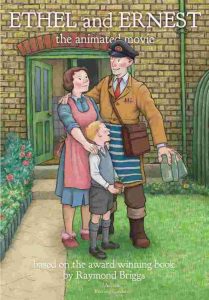 This is our first social event of the year, so the evening will start a little earlier than normal.

We are screening an animated film based on Raymond Briggs’ award-winning graphic novel, ‘Ethel & Ernest’ – a tribute to his parents.

It follows the lives of this ordinary couple (and then family) through the war and the immense social changes of the 20th century.
Described as “touching”, with lots of cups of tea.  Features the voices of Brenda Blethyn and Jim Broadbent.

The director, Roger Mainwood, lives in Wivenhoe. This is his first full length animated film.